Pennine Platform is a 60 page poetry magazine, published twice a year in May and November. The magazine is independent and completely self-supporting. It is one of the longest surviving little magazines in the UK, having started publication in 1973. It was initially the offshoot of Pennine Poets, a poetry workshop group based in the West Riding of Yorkshire, with which it still retains informal connections. Though with local roots, it has an international reach. It has published poets from several European countries and from five continents; and among its subscribers are Harvard and the Bibliothèque Nationale de France.

The magazine comprises an editorial, poems, brief Notes on Contributors and occasional reviews and articles. It has a loyal readership not only from the Pennine region of northern England but with contributors and subscribers worldwide. Its pages represent a much broader cultural mix than the title Pennine Platform might suggest.

Following Nicholas Bielby’s retirement from editing, the baton has passed to Julia Deakin and Andrew Boobier – Julia on editorial and Andrew on design, though both work as a team on all aspects.

Nicholas’s is a hard act to follow, but the new editors will do their best to take the magazine forward whilst maintaining his high standards. The website will gradually be updated as time permits. 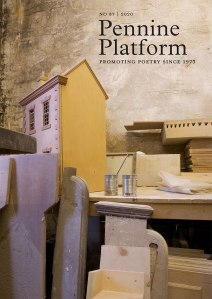 Issue 87 now available. 56 new poems by 32 poets, from the Pennines to Australia.